In January 1948, swarms of Iraqi students, workers and the needy from Baghdad flocked to the streets of the capital to protest the Portsmouth Treaty amid deteriorating living conditions. The treaty was, in the words of the Palestinian historian Hanna Batatu, a veiled extension of the Anglo-Iraqi treaty of 1930, which “made Iraq practically an appendage of the British Empire”.

Many protesters, including the students who played a key role in the so-called al-Wathba uprising, were killed, wounded and arrested in a relentless campaign of repression that culminated in a bloody crackdown on January 27 that opened fire on protesters on a bridge the Tigris, later named Jisr al-Shuhada (Martyrs Bridge) in memory of the fallen.

When the guns stopped, “the bleeding from the crowd was terrible. There were bodies everywhere. Some were involved in the iron of the bridge. Others fell into the river and were carried away by the current, ”writes Batatu.

Between 300 and 400 demonstrators were killed and wounded in Baghdad that day. Among the victims was Jafar, the youngest brother of the revered Iraqi poet Muhammad Mahdi al-Jawahiri.

On the morning of the third day of mourning, al-Jawahiri locked himself in a small room in the al-Hayder Khana neighborhood and wept with “unprecedented howls”.

With the bloodied image of Jafar in his memory, al-Jawahiri rewrote an elegy that he recited to a large crowd that had gathered that afternoon from the roof of al-Hayder Khana Mosque near Jisr al-Shuhada to mourn the dead:

“Do you know or don’t you know?

that the victims’ wounds are a mouth?

A mouth different from that of a deceiver

It cries out to the poor and hungry:

Shed your blood and you will be fed.

And yells at the submissive:

Humble the bad guys and you will be honored. “

Al-Hayder Khana Mosque on al-Rashid Street in Baghdad, Iraq on September 7, 2020. [Nabil Salih/Al Jazeera]While walking into downtown Baghdad recently, as I was crossing Jisr al-Shuhada, I thought of these events of 1948. I looked around and found that today’s conditions are no different from those that caused the al- Wathba triggered: poverty, negligence, greed and injustice.

Impoverished elderly people sat on the sidewalk. They stared ahead like robots, holding out an empty palm and muttering cries for help. Plastic rubbish lay on the bank of the river. Government SUVs with tinted windows lined the sidewalks while obese guards growled at tuk-tuk drivers trying to get passengers over the one-way bridge for a few bills.

In Iraq, some are above the law and others are crushed by its executors.

But just like in 1948, the public wouldn’t take it. Since October 2019, the oppressed youth have taken to the streets again to protest against political and economic repression. This time, public anger poured into another bridge – Jisr al-Jumhouriya (the Republic Bridge), a 30-minute walk from Jisr al-Shuhada.

I also enjoyed walking on Jisr al-Jumhouriya. I crossed the bridge and took a look at Abu Nawas Street, which flowed gracefully along the riverside, before entering al-Tahrir Square, where the Freedom Monument by Iraqi sculptor Jawad Salim is stretched against the backdrop of palm trees.

However, the bridge was closed late last year to protect corrupt politicians occupying luxurious palaces on the 10 square kilometers of confiscated land known as the “Green Zone”. 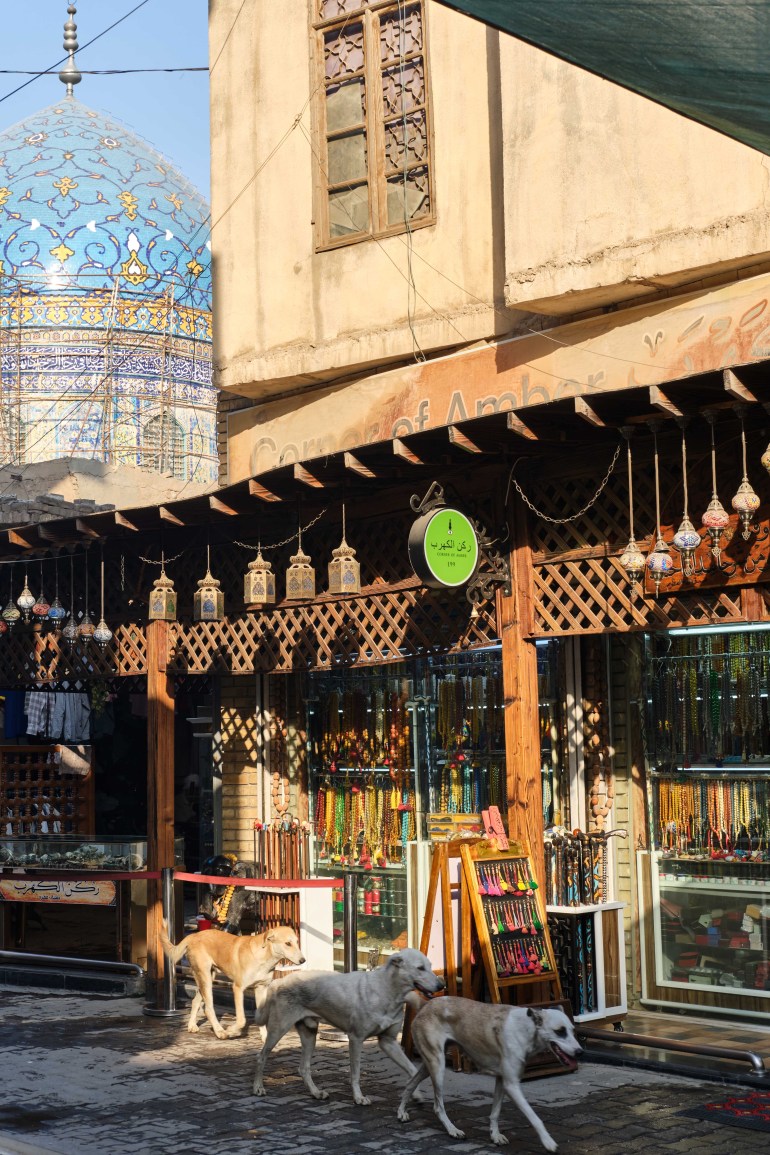 Stray dogs scurry through the Souq al-Haraj in Baghdad, Iraq on September 7, 2020. [Nabil Salih/Al Jazeera]When I went through Jisr al-Shuhada, I thought about these barriers and exclusions, about what had become of my city. I wandered the zigzag alleys of the Jadid Hasan Pasha neighborhood near the al-Hayder Khana mosque and looked at the antiquated buildings.

The distinctive shanasheel, the balconies decorated with beautiful wooden lattices, quickly disappear. Some buildings were demolished to make way for ugly commercial buildings that were erected with heavy bribes in complete disregard of community regulations. Others have fallen into disrepair, relying on neighboring buildings that are on the verge of collapse.

As I walked the narrow streets, skinny stray dogs roamed around while exposed men served kebabs to their exposed customers in filthy restaurants. Out on the sidewalks, old men puffed on their cigarettes and sipped istikanat, made from sweet, hot cardamom tea, while they sat quietly by the standing sewage.

I kept thinking that any mayor of Baghdad who has been indicted by his corrupt party since the US invasion in 2003 should be tried for the terrible cannibalization of the city. But is there justice in Iraq? Do the ruling crooks even know these areas and people?

I soon reached Souq al-Haraj. Baghdad’s history was put up for sale on the dusty shelves of antique shops. When Baghdadi families escape the war and violence facilitated or orchestrated by the political elites after the invasion, they sell their belongings for a song. In Souq al-Haraj you can find everything: from Swiss vintage watches, gramophones and bars of soap “Made in Iraq” to porcelain dishes and telephone directories from a time when listed names did not easily become a number in a victim number. 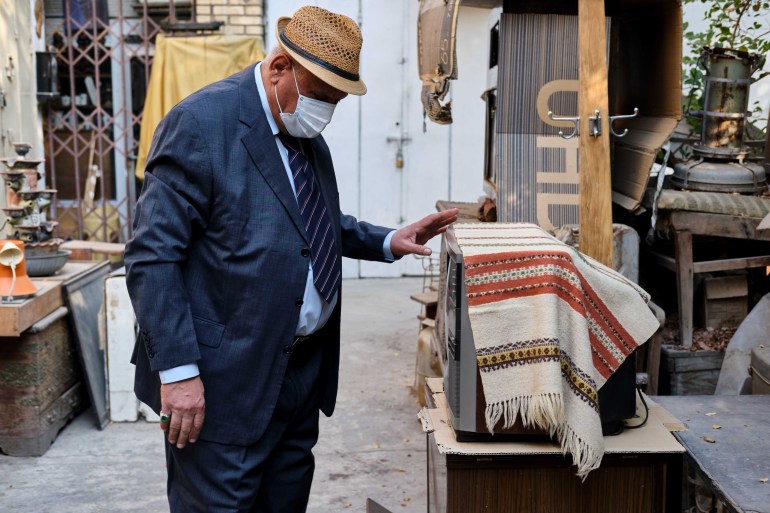 The owner of an antique shop displays his wares in Souq al-Haraj in Baghdad, Iraq on September 7, 2020. [Nabil Salih/Al Jazeera]Across the street from al-Rasheed, next to al-Maidan Square, scavengers sat on the floor selling everything from used power supplies to worn flip-flops and old radios. A scene that matches the reports of poverty that flood our computer screens and refutes a false image of stability and prosperity that is often promoted by the state and its parrots in the rich media.

Soon there will be nothing left to see or sell from old Baghdad, I thought to myself.

that they had demolished Sindibad Cinema

The late Iraqi poet Sargoun Boulous wrote these lines, lamenting the decay of a legendary cinema in Baghdad.

I wonder what he would say about Iraq today if he had been alive, if he could stroll the sidewalks of downtown Baghdad, where no smiles adorn the faces of the little girls selling chewing gum that no one buys and desperate youths push handcarts past the homeless, who hallucinate in damp corners, invisible.

What pain lines would he write?

The views expressed in this article are from the author and do not necessarily reflect the editorial stance of Al Jazeera.

A Look-See at Covid Restriction Outcomes

Brexit: Gibraltar will get UK-Spain deal to maintain open border