At least eight people were killed in Myanmar after security forces opened fire on some of the largest anti-military protests in days, three months after a coup plunged the country into political unrest.

Thousands of people in cities across the country took part in the protests on Sunday calling for the “Myanmar Global Spring Revolution”. Rallies in support of the anti-coup protests also took place outside Myanmar when Pope Francis called for peace.

“Shake the world with the voice of the unity of the people of Myanmar,” the organizers said in a statement.

According to the Mizzima news agency, two people were shot dead in Mandalay, the country’s second largest city.

The Irrawaddy news site previously posted a photo of a man alleged to be a plainclothes security officer aiming a rifle in Mandalay.

Reuters news agency was unable to verify the reports, and a ruling government spokesman did not answer calls for comments.

The military took power from the elected government of Aung San Suu Kyi and the ruling National League for Democracy (NLD) in a coup on February 1, sparking a civil disobedience movement of strikes and mass protests.

As part of the Global Myanmar Spring Revolution Day on Sunday, people march through Kyaukme in Shan State in Myanmar [Shwe Phee Myay News Agency via AFP]According to United Nations estimates, longstanding conflicts with armed ethnic groups in border areas in the north and east have intensified, displacing tens of thousands of civilians.

The military responded to the protests with arrests and deadly violence, ignoring calls from neighboring countries and the United Nations to end the violence.

In Yangon, young people gathered on a street corner before quickly marching through the streets in a flash mob and soon dispersed to avoid clashing with the authorities.

“Overthrowing the military dictatorship is our business!” they sang and waved a three-finger salute in a sign of resistance.

In eastern Shan State, youth carried a banner that read, “We cannot be governed at all.”

Bombings were also reported in various parts of Yangon on Sunday. There have been increasing numbers of explosions in the former capital, and the authorities have blamed “instigators” for them.

No responsibility claims were made for the explosions.

The Assistance Association for Political Prisoners (AAPP), which is overseeing the situation, says security forces have killed at least 765 protesters since the coup, while around 4,609 people have been arrested.

The military, which the AAPP has identified as an illegal organization, has confirmed that 258 demonstrators, 17 police officers and seven soldiers were killed.

The generals ruled Myanmar for almost 50 years until they began a preliminary reform process 10 years ago.

I couldn’t attend the London protest in person today, but I was in spirit because the amazing artist @ohn_mar_win took my words with her! 🥺❤️ # GMSR22222 #GlobalMMSpringRevolution # GlobalMyanmarAlliance # WhatsHappeningInMyanmar #London https://t.co/7fkUruUHiP pic.twitter.com/nbWXvpDOG2

Army chief Min Aung Hlaing said the coup was necessary because of alleged fraud in the November elections, which the NLD won in a landslide. The electoral commission has stated that it has not found any evidence of misconduct.

The ongoing violence in Myanmar has alarmed the international community.

Rallies in support of the anti-coup movement took place in cities from Taipei to Vancouver and London, where exiled Hong Kong politician Nathan Law supported the demonstrators.

“We need to mobilize our global system to punish dictators and stop them from killing people,” he said. “We need a government that serves the people instead of terrorizing them. We need leaders who will lead us and not ask us to bow to them. “

In Rome, during his mass on St. Peter’s Square on Sunday, Pope Francis prayed that Myanmar “could walk the path of encounter, reconciliation and peace”. 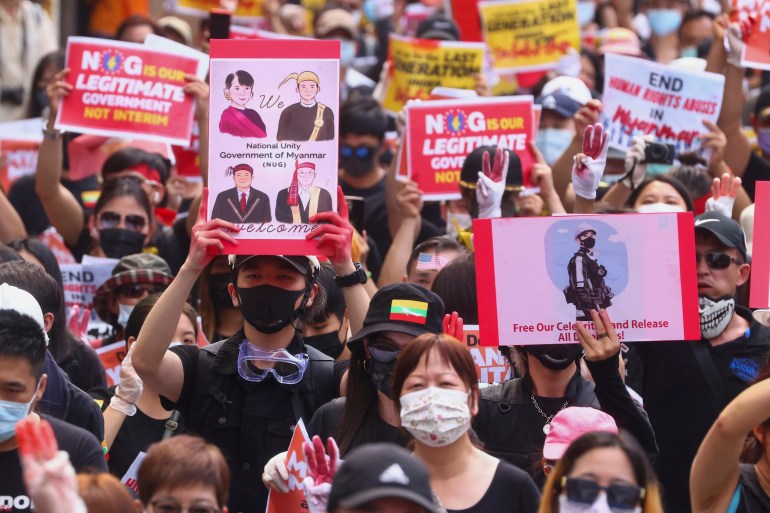 As soon as Vilified, Pot Is Turning into (Gasp!) Mainstream

Wendy Williams Shares A Pic Cuddling With A New Mystery Man She Referred To...