Three days of national mourning were declared after the fire, believed to have started when an oxygen cylinder exploded.

At least 27 people were killed and 46 injured after a fire broke out in a coronavirus intensive care unit in Baghdad on Sunday as Iraq faces a growing wave of COVID-19 cases.

The fire at Ibn Khatib hospital in the Iraqi capital was started by an accident in which an oxygen tank exploded, according to medical sources quoted by Reuters and AFP.

The flames spread quickly, according to civil defense officials, as “the hospital did not have a fire protection system and false ceilings allowed the flames to spread to highly flammable products”.

Major General Kadhim Bohanm, the head of the Iraqi civil defense department, said 90 out of a total of 120 patients and relatives had been rescued, the state news agency INA quoted him as saying.

The fire has been extinguished, he added.

The Iraqi health system, ruined by decades of sanctions, war and neglect, has expanded even further as a result of the coronavirus crisis.

Al Jazeeras Simona Moltyn, who lives in Baghdad, said the death toll was likely to rise as many of the injured were severely burned.

A patient suffering from COVID-19 is being prepared for evacuation from Ibn Khatib Hospital in Baghdad after a fire caused by an explosion in the oxygen tank [Thaier Al-Sudani/Reuters]The total number of people infected with COVID-19 in Iraq is 102,528, including 15,217 deaths, the Ministry of Health said on Saturday.

At the time of the fire, 30 patients and dozens of relatives were in the intensive care unit, which was reserved for the capital’s most severe COVID cases.

Iraqi hospitals do not usually have centralized oxygen supplies, and patients who need it are usually given a bottle that is placed by their bed. Due to staff shortages, relatives sometimes have to change cylinders, a doctor told Al Jazeera.

“The majority of the victims died because they had to be moved and ventilated, while the others were suffocated by the smoke,” said civil protection.

The Ministry of Health, which did not issue a statement until a few hours after the fire, said it had “saved over 200 patients” and later promised an official number of dead and wounded.

The fire sparked outrage on social media and the Prime Minister called for an investigation into the cause of the fire.

“That is not enough for Iraqis,” said Foltyn. “We often hear the government promise to investigate, but we seldom see the results or government officials responsible for neglect or mismanagement held accountable.

In a statement, the government’s human rights commission said the incident was “a crime against patients who are exhausted from COVID-19 and who put their lives in the hands of the Ministry of Health and its institutions and die in flames instead of being treated”. 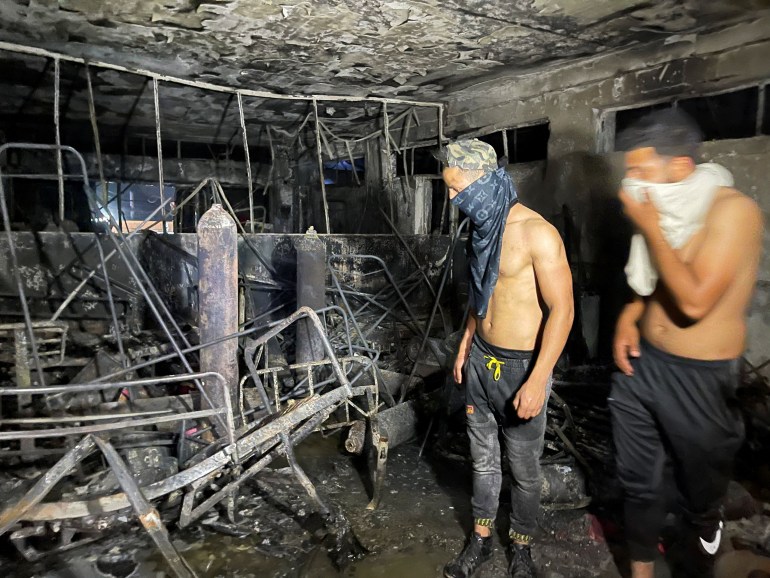 The fire is believed to have started when an oxygen tank exploded and spread quickly because the hospital “did not have a fire protection system”. [Thaier Al-Sudani/Reuters]The commission called on Iraqi Prime Minister Mustafa al-Kadhemi to dismiss Health Minister Hassan al-Tamimi and “bring him to justice”. A hashtag calling for the health minister’s dismissal was trending on Twitter.

Kadhemi then called for “an immediate investigation with those in charge of the ministry” and demanded that the “hospital director, the security chief and the technical maintenance team be sent to the investigators and not released until the culprits are called in”. Justice”.

What it’s really like steering the world’s biggest ships

Because the coronavirus rages in California, L.A. medics are informed to ration oxygen.

Singapore will get shot within the arm from world drug demand