The Kyrgyz border guard accuses Tajik troops of breaking a ceasefire after clashing over a water dispute.

Kyrgyzstan has accused neighboring Tajikistan of building troops and military equipment near its border after clashes near the de facto Tajik enclave of Vorukh, in which at least 41 people were killed and dozen injured.

The Kyrgyz border guard also said on Saturday that Tajik troops had opened fire on Kyrgyz vehicles near a Kyrgyz village.

Tajikistan made no comment, despite a Tajik security source saying Dushanbe was adhering to a ceasefire and troop withdrawal agreement.

At the same time, talks continued to resolve the conflict between the two Central Asian nations, both of which are Russian allies.

The presidents of the two countries called on Saturday to discuss further steps, their offices said.

“In violation of bilateral agreements on the withdrawal of troops to their bases, the other side continues to bring more troops and heavy equipment to the border with Kyrgyzstan,” said a statement by the Kyrgyz border guard.

An area of ​​Kyrgyzstan populated by thousands of people remained cut off from the rest of the country, border guards said, because Tajik forces blocked a road that crossed disputed area.

Clashes broke out this week along the border between Tajikistan’s Sughd Province and Kyrgyzstan’s southern Batken Province over an alleged dispute over a reservoir and pump on the Isfara River.

Villagers from opposite sides hurled stones at each other and border guards joined the fight with weapons, mortars and even, according to Kyrgyz border guards, a Tajik attack helicopter.

At least one Kyrgyz outpost and a number of houses on the Kyrgyz side were set on fire while Tajikistan reported damage from a bridge being shot at.

The Kyrgyz authorities reported 33 dead, all but three civilians, and 132 wounded.

Local government sources in Tajikistan said eight people were killed on its side, including four border guards.

On Saturday, the AFP news agency announced that its Batken correspondent could not reach the conflict area because Kyrgyz men holding stones turned back cars on a road lined by Kyrgyz soldiers between the village of Min-Bulak and the town of Isfana.

Also on Saturday, several hundred people gathered in front of the government offices in the Kyrgyz capital, Bishkek, and called on the government to hand them over weapons for use on the border.

In a statement by the National Security Council through the office of the Kyrgyz leader Sadyr Japarov, it is said that the protesters’ demands are impossible to meet “because they are fraught with consequences”. 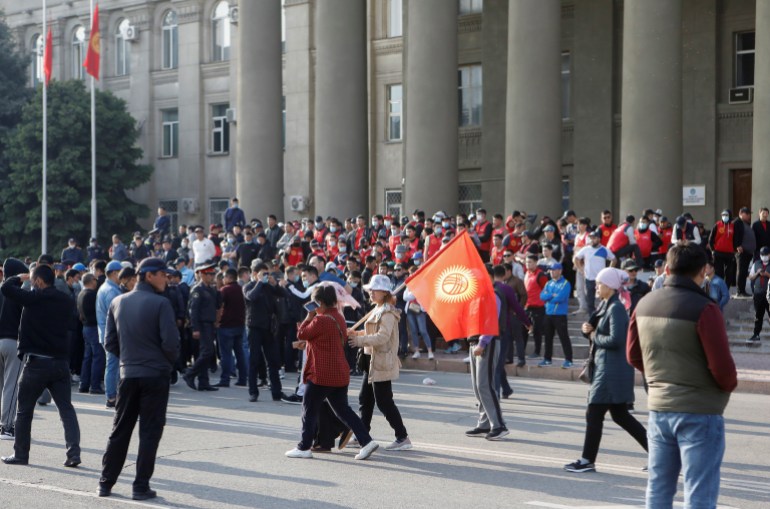 Protesters are holding a rally in Bishkek to demand that the authorities hand over weapons to volunteers who are ready to assist residents of southern Batken Province in Kyrgyzstan [Vladimir Pirogov/Reuters]Border disputes between the three countries that divide the fertile Fergana Valley – Kyrgyzstan, Tajikistan and Uzbekistan – stem from demarcation during the Soviet era.

Due to the knotting and twisting of the borders, several communities had only limited access to their home countries.

Neighboring Uzbekistan and Russia, which have bases in both countries, have offered to mediate the recent conflict.

Covid: WHO in ‘shut contact’ with UK over new variant