George Town, Malaysia – The arrest of graphic artist and social activist Fahmi Reza for a satirical list of songs poking fun at a comment by the Queen of Malaysia has rekindled the debate on freedom of expression in the Southeast Asian nation.

Police arrested Fahmi, who became famous in 2015 with a now iconic clown cartoon that mocked then Malaysian Prime Minister Najib Razak on April 23, and accused him of insulting the Queen with the playlist he called Dengki Ke (Malay for ‘Are you jealous? ”) and illustrated with a cover picture of the king.

He was also accused of sharing “offensive and threatening content” on the list, which he uploaded to Spotify and Apple Music, which included songs such as “Jealousy” by Queen and “God Save the Queen” by Sex Pistols.

Shortly after the arrest of 44-year-old Fahmi, award-winning political cartoonist Zunar was also investigated for a caricature of a minister of state that he published in January.

The two cases have put censorship back in the spotlight in a country where freedom to be creative has long been hampered by restrictive laws and political, religious and cultural sensitivities.

Most of the people in Malaysia are ethnic Malaysians who are Muslims, but there are also large communities of ethnic Chinese, Indian, and indigenous people who follow other religions and beliefs.

“There is always a limit to when a piece is intended for the public, be it a mural, sculpture, performance or installation,” said Bibichun, a leading visual artist who is based in the UNESCO-listed George Town the northwest island of Penang lives.

Before the coronavirus pandemic, the city was a magnet for tourists, who flocked to look at the street art that spread across buildings and alleys after Lithuanian artist Ernest Zacharevic painted six murals there in 2012 and caught the public’s imagination.

Prior to the lockdowns, eight million tourists are expected to visit the island in 2020 to generate valuable income for artists like Bibichun, who make the most money on commissioned murals, which start at at least RM 1,000 (US $ 243) apiece.

“Sexy, racist and political artwork is not allowed,” said Tan Chor Whye of Can Can Public Art, a Penang organization that hires artists to revitalize urban spaces with street art. “When a project is supported by the state government, there is more control over issues while individual donors allow more freedom, but you still have to consider the authorities and community comments.”

Even historical bodies and religious organizations sometimes question the works of art.

“Put simply, just paint pretty, Teletubbies-esque, happy pictures or the public will go crazy,” Bibichun said. “Opposition propaganda is being suppressed before it can even begin.”

An unregulated graffiti scene still thrives underground, but the cost of painting your way is against the law and no income.

Since murals help attract tourism and bring the city’s streets to life, they’re also in demand in small towns like Sasaran, a fishing village on the west coast just over an hour’s drive from Kuala Lumpur. 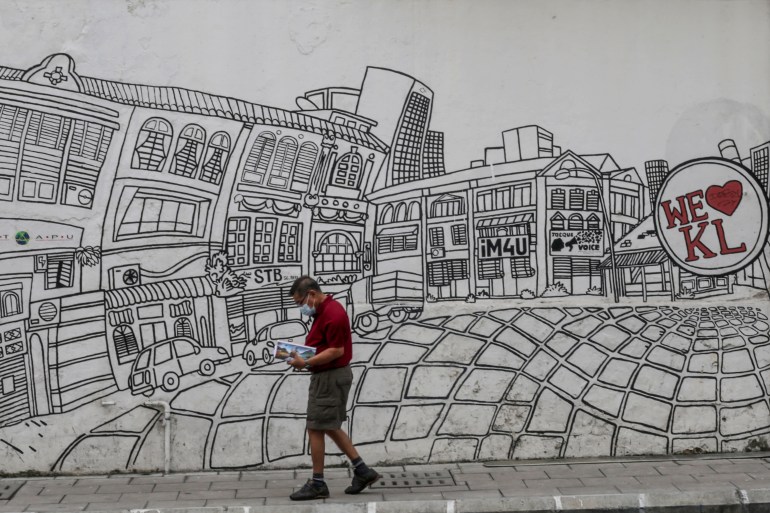 A mural on a street in Kuala Lumpur. Artists not only have to deal with strict laws, but also with an audience that can quickly take offense [File: Ahmad Yusni/EPA]Here Bibichun and two other artists commissioned in Penang, Sliz and his trainee Lyana Leong, came under fire for two pieces they had painted on the walls of the Sasaran Arts Community Hall.

“Our goal is to bring art to our community so that rural people can see and learn art,” said Ng Bee, chairman of the commissioning Sasaran Arts Association, which has organized a number of arts festivals over the past few years.

The mural by Sliz and Leong was supposed to consist of three women holding hands who were loosely inspired by Henri Matisse’s “The Dance” but dressed entirely in vests.

However, on April 19, before the two artists completed the basic skin tone shape of the three bodies, some Sasaran residents had used social media to complain that the “naked” figures violated religious sensibilities and racial hatred among the various ethnic groups in Malaysia could evoke groups.

“I noticed that it was mainly ethnic Malaysians who spoke out against us,” said Lyana Leong, 24, who is partly Chinese, partly Malay and from Bukit Mertajam, Penang. “Maybe they are not very well trained in art and thought it would be inappropriate for children to see our artwork.”

Malay artist Sliz says less urban communities in Malaysia are most susceptible to abuse. He is disappointed that those who were upset about the work didn’t even bother talking to the artists about it.

“If you see something in your area that you think is wrong, take calculated, rational action. Writing a “triggering” racist / religious Facebook post is not. Passers-by could have reached out to us to ask questions as they had the time to snap a picture and start some online hate speech. “ 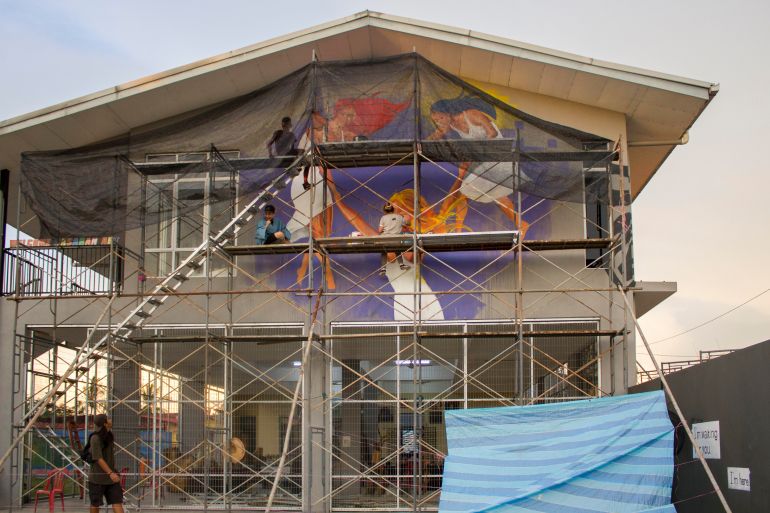 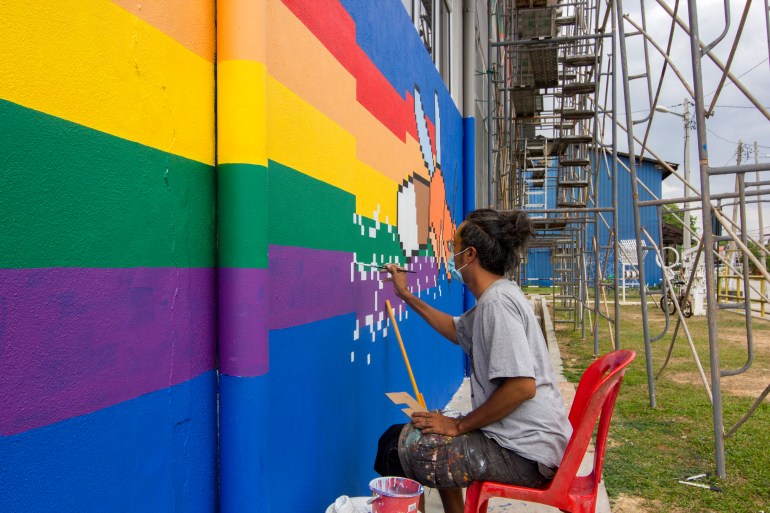 The artist Bibichun at work on the rainbow mural, which caused more controversy as it was believed to support the LGBTQ movement [Courtesy of Pui San]After Sliz and Leong adjusted their mural, Bibichun was attacked for the rainbow he was painting at the entrance to the hall when people criticized him on social media for “supporting the LGBTQ community,” a group that operates in Malaysia is still avoided and monitored.

Ng didn’t designate a particular ethnic group for the comments.

Malaysian artists also have to deal with government regulation and often work closely with other agencies that provide funding and space.

Last month the Sabah Art Gallery was criticized after 31 works of art in the center of Kota Kinabalu, the capital of the state of Borneo, were canceled.

The artwork was painted on the pillars of a dilapidated 1920s building by various artists and debuted on December 20 last year as the third edition of the open-air art installation Pillars of Sabah (POS).

In 2018 and 2019, the pillars were deleted with the consent of the project founders and the participating artists to make room for new works of art.

This year, the Sabah Art Gallery, which claims ownership of the cultural heritage, “without warning or explanation” has prepared the space for an upcoming project, POS co-founder Jared Abdul Rahman told Al Jazeera. 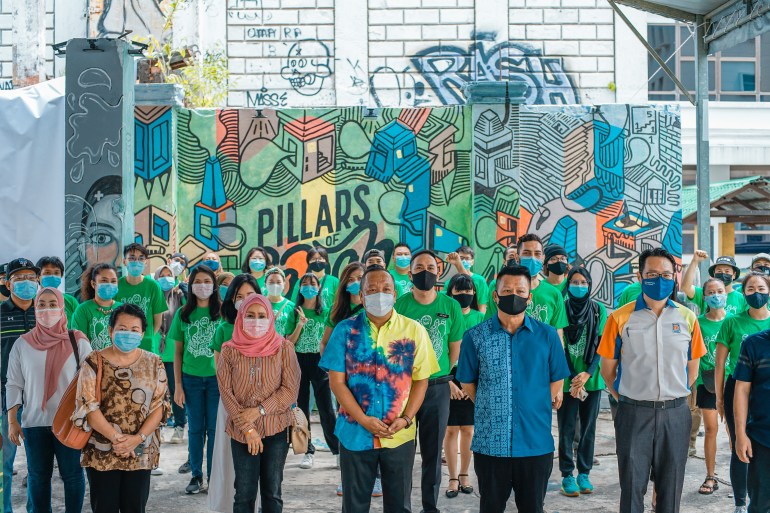 The Pillars of Sabah 3.0 community of artists and supporters is about to complete the project in December 2020 [Courtesy of Pillars of Sabah]“We don’t mind what comes next, we just wanted to be informed. Sabah Art Gallery owns the website but has given us permission to use it for our project funded by CENDANA, a national arts promotion agency. It has results that we cannot fully satisfy right now. “

The problem ended after an online debate on April 29th when the Sabah Art Gallery posted a public apology on its Instagram page.

“The art scene should have its own support system,” Jared said. “We have to stop the heavy dependence on the government, especially if they don’t focus on the interests of the artists.”

The gallery director, Jennifer Linggi, did not respond to Al Jazeera’s request for comment.

The OTW opened in April with the group exhibition Faded with works by artists such as Sliz and Bibichun. Sales may help them stay afloat, but with a limited market outside the capital and domestic tourism restricted by interstate travel bans, murals remain the quickest way to make money.

“What happened in Sasaran is a matter of mentality,” said Chan. “Murals reflect what artists see and shouldn’t be frowned upon. I believe there is still room for Malaysian wall painters to learn and grow from the experience. “

Investigating and seizing @ kuasasiswa’s account is just another form of harassment and intimidation – stop this now! #Satireisnotacrime https://t.co/9YtC7R8vPS

Meanwhile, Fahmi returned to a police station to question two more posters he’d designed on May 6 – including one that mocked the health minister – and posted on Facebook and Twitter in early April.

Unlike other Malaysian artists who are willing to negotiate restrictions in order to make art, Fahmi does not give in.

He posted on his Facebook profile on April 30th that he “is ready to face new investigations or allegations and to defend any of my graphic work. As usual, I will not delete these posts. The people shouldn’t be afraid of the government, a government should be afraid of the people. […] Whatever the obstacles, I’ll keep fighting. “

NBC Developing Unscripted Adaptation Of Guess Who? From Endemol Shine – .