Mindanao, Philippines – They gathered shoulder to shoulder, many without masks, and shouted unanimously to greet the 2020 Christmas season. But the coronavirus wave that doctors warned about did not occur.

When restrictions were eased slightly in January, the exhausted residents of the southern Philippines made their way to the nearby boardwalks and highland parks.

Again, there was no spike in cases and some began to question whether the pandemic was real or “just a moneymaker”.

When the Philippine summer arrived in March, many were confident enough to pack public halls in cities and towns to raise government aid, ignore social distancing restrictions, and enjoy the free lunch that was handed out by elected officials.

Some mayors even allowed the reopening of cockfighting arenas, a magnet for gambling and mass gatherings. Some Catholic priests also subtly encouraged parishioners to attend Sunday masses in person, although church attendance was limited to a maximum of half the normal capacity.

In farming communities and fishing villages, residents resumed their usual habits – hanging out with friends, walking around the neighborhood or playing basketball and billiards – mostly without a mask.

When the fiesta season started in April and May, many also hosted dinners for visits to family and friends, despite a ban and threats of arrest and other punishments. Since every town and village celebrated its own patron saint, the joyful festival was repeated in the closely connected communities in the region.

Health officials and police officers, usually from the same district, looked the other way as drinks were passed around street corners and people blared out their favorite karaoke songs as if the second wave of coronavirus was a universe away in Manila and other urban areas.

Inevitably, cases began to rise – slowly at first, then in a cascade that is still not slowing down – a sign, experts said, the pandemic is deeply anchored in rural communities where healthcare facilities are already facing overcapacity.

“This is not isolated in Visayas and Mindanao provinces,” said Peter Cayton, associate professor in the Department of Statistics at the University of the Philippines.

“The increase also affects many provinces of Luzon,” he told Al Jazeera, referring to the country’s three major archipelagos.

According to the latest data from the Philippine Vaccine Tracker, only about 1.5 percent of the 110 million people in the Philippines are fully vaccinated against the virus, and government contact tracing agencies cannot catch up with the skyrocketing number of new cases. Hospitals are already busy and medical resources are scarce.

More than 7,400 new cases were reported nationwide on Thursday, bringing the total number of infections to 1.29 million.

Edson Guido, a data analysis expert with the University of the Philippines, noted that Mindanao accounted for a quarter of the new cases on June 7, more than Metro Manila, showing that the pandemic has shifted to regions far outside of the metropolitan areas.

In Dipolog, a town on the southern island of Mindanao, residents received an indication of how serious the situation had become when two high-ranking members of the Catholic clergy and a nun died within a few days at the end of May. They were hastily buried without the usual elaborate rites. Another high-ranking priest is in quarantine trying to recover from the illness.

A former mayor and his brother from a nearby town were also admitted to a government hospital in the same town as dozens of people were treated for coronavirus outside in makeshift tents or hooked up to oxygen tanks in their vehicles for sitting in their vehicles the lack of Hospital beds. A 37-year-old patient died the same day her family learned she had COVID-19.

Hundreds of other patients with mild infections or no symptoms at all have been advised to quarantine at home.

“COVID is real and is roaming our province,” wrote Philip Limsi, a doctor at the city’s only hospital fully equipped against COVID, on social media.

“Please let us help bring the cases down. There are no more rooms and the supply of oxygen tanks is becoming scarce, ”he said.

In the nearby town of Polanco, dozens of local government employees were infected, forcing city hall operations to be suspended.

City leaders faced some questions after enabling a rally of hundreds of farmers and motorcyclists to receive government grants and food parcels despite a lockdown.

According to the Ministry of Health, the city and its greater province of Zamboanga del Norte had already reported in the third week of May that their intensive care beds were full and that there were no more ventilators.

More younger people – some as young as 16 years old – have also been hospitalized in the province, prompting officials to declare a strict two-week lockdown beginning June 1.

The order also includes a ban on public alcohol consumption across the province. But on Wednesday, some people were still seen trading alcohol and drinking from a single shared shot glass on the side of the road.

Citing her busy schedule due to the increase in cases, Dr.

Despite a strict ban on mass gatherings, officials in the city of Polanco allowed hundreds of farmers and motorcyclists to gather at a public gym to watch on Aug. [Ted Regencia/Al Jazeera]

Among those who succumbed to COVID was Rosalina Ocupe, a former elementary school teacher who returned to her hometown of Polanco after retiring in Chicago, USA.

As a vulnerable elderly person, she had been careful not to go outside while the pandemic spread. But shortly after her 79th birthday in early May, she fell ill after a domestic helper fell ill. She spent three weeks in the hospital in Dipolog on a ventilator.

Her daughter Patty had hoped her mother would recover and be home in a few days. Instead, the family received news on Wednesday that their mother had died.

“Have a good rest, Mom,” wrote Patty in homage to her mother, whose remains were hastily buried on Wednesday after sunset, dispensing with the traditional Filipino rites of the nine-day wake before the funeral.

Patty’s older sister Marichu, who lives in Chicago, was unable to come home due to travel restrictions. After her mother dies, she wonders if she could have done more for her mother.

“Have I done enough for [her] Who prayed day and night for my success? That question will always be [left] unanswered.”

Randy, her brother, is robbed.

“[It is] sad, painful and very unfair that COVID has taken her life, ”he told Al Jazeera.

Dipolog is not even the hardest hit of the provincial areas.

Nearby Dumaguete in the Visayas saw infections rise 206 percent between May 31 and June 6, placing it high on the list of cities facing a coronavirus surge nationwide. 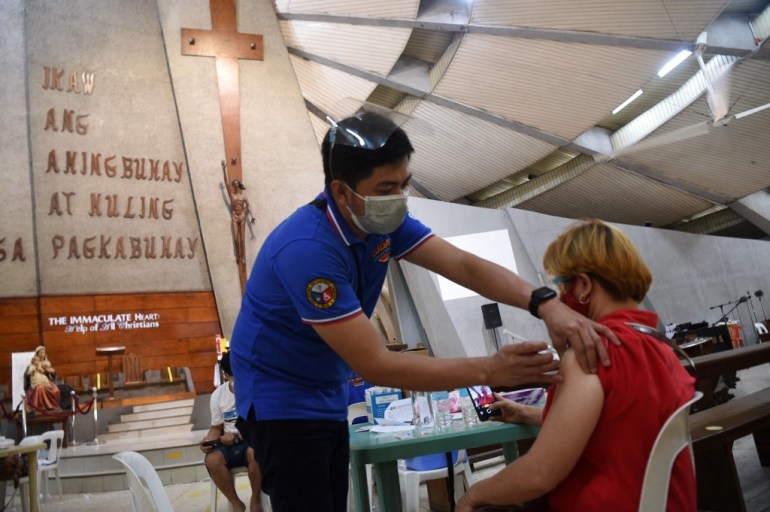 According to the Philippine Vaccine Tracker, around 1.5 percent of the 110 million Filipinos will be fully vaccinated by Thursday [File: Ted Aljibe/AFP]Recent deaths in the university town include a retired judge whose wife is also currently battling the disease and the town’s vice mayor, Alan Cordova, who suffered cardiac arrest and died while cycling just days after recovering from the coronavirus.

In an interview with reporters on Monday, Dr. Kenneth Coo, a Dumaguete-based doctor and national chairman of crisis management for the Philippine College of Physicians, said that even if the city closes its doors to outsiders in response to the surge, there has been “community broadcast”.

“The most important thing is that we have to isolate the danger,” he said, warning that all of the hospitals in Dumaguete are overcrowded, while also noting that the latest infections in the city have been traced back to dinner parties with family and friends.

“No parties, please. Please no mass gatherings, this is my request to the community. “

Several cities in Mindanao are also on the brink of recovery such as South Cotabato, General Santos and Davao City, where Duterte was mayor for more than 20 years. Among the most recent fatalities was the provincial governor of Davao del Sur, Douglas Cagas, who died on Thursday.

In a press conference on Wednesday, the OCTA Research Group, which is tracking coronavirus cases in the Philippines, said the national government should consider sending health workers and equipment to Mindanao.

OCTA’s Ranjit Rye warned hospitals could be overwhelmed if the surge continues.

“Our appeal to the national government is to have us put people, equipment and support in these areas,” said Rye, adding that the surge could take a month.

Limsi, a provincial doctor and respiratory specialist, appealed for people to stay home, adding, “Your birthday party would not be worth the suffering of your visitors.” [if they are infected with COVID]. “

The variant that emerged in South Africa is reported within the U.S. for the...

Biden and Trump in battleground blitz: US elections reside information | US & Canada

Why Jerusalem’s Aqsa Mosque Is an Arab-Israeli Fuse