Moon praised the technology, economic advantages, military capabilities, and national prestige of developing the aircraft depicted, a perspective widely shared in most of the reports on the multi-role fighter aircraft development project, which was worth billions of dollars.

In the fanfare, any criticism of an arms industry known for its runaway budgets and an arms trade that contributes to the destabilization of regions or states in conflict was lost in the fanfare. Questions also concern the contribution that a regional arms race can make to South Korea’s national security.

South Korea decided more than 20 years ago to develop its own advanced fighter jet under former President Kim Dae-jung, which received the Nobel Peace Prize for its so-called sunshine policy, which aimed to ease tensions with the North.

After several feasibility studies and dealing with technology transfers from the USA, development began in earnest in 2016. At the April 9 unveiling, President Moon proudly described much of the technology featured in the new aircraft, the Fighting Hawk. Currently a prototype.

“The AESA radar and infrared search and tracking system can quickly identify enemy aircraft and missiles. The “Electro Optical Targeting Pod” can precisely target ground targets, “Moon told the dignitaries who had gathered in Dingon in the southeast of the country.

“Today we realized our ancestors ‘dream:’ Let’s protect our skies with our own hands. ‘It’s really overwhelming,’ said President Moon.

As soon as it goes into production around 2026 – after six prototypes performed more than 2,000 test flights – the fighter will be a replacement for the country’s aging fleet of F-4 and F-5, alongside the upcoming 5th generation F-35s and its existing fleet of F-15 and F-16.

“These types of weapons and advanced warplanes are presented with a lot of show … claims about their capabilities and a clear display of ‘appearance, this is really high tech, this is really important technology” “, said Pieter Wezeman from Stockholm International Peace Research Institute (SIPRI) told Al Jazeera.

“It creates that image of being the crown jewel,” added Wezeman, who is a senior researcher on weapons and military spending.

Moon also pointed out the economic benefits of the project.

Around 700 local companies were involved in the development and created 12,000 of the jobs that the president called “decent” jobs. Mass production will create 100,000 job opportunities and generate more than $ 5 billion for the economy.

“The KF-21 project will become a driving force in making the aviation industry an undeniable future growth engine for the Republic of Korea,” said Moon. 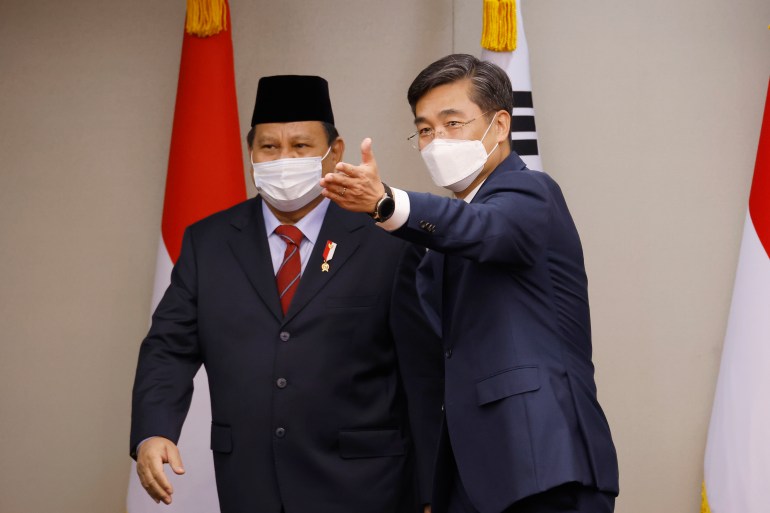 Indonesia has agreed to bear part of the cost of developing the new hunter. The country’s Defense Minister Prabowo Subianto (left) visited Seoul earlier this month and met his Korean counterpart Suh Wook [Kim Hong-ji/Pool via AP]But jewels cost money, and critics say the fighter may not get the benefits President Moon described.

Critics point out that the aircraft alone cost about $ 7 billion to develop, with an estimated $ 9 billion more being needed to produce the 120 fighter jets expected to be manufactured and used by 2032. Industry estimates suggest that both development and construction costs could increase significantly.

The US-led F-35 Joint Strike Fighter project spans eight countries, with South Korea said to buy 60 aircraft, some of which have already been deployed.

Lockheed Martin was granted permission to transfer 21 key technologies to South Korea after Seoul signed the contract, which Washington also linked to its commitment to the alliance with South Korea – a printing tactic speculated in the press and later by the former US President Donald Trump was formalized on related security issues.

For the F-21 “Fighting Hawk”, South Korea let Indonesia take over 20 percent of the development budget in exchange for 50 aircraft and technology transfers. However, according to media reports, the Southeast Asian nation is behind on its payments.

“Once you get to the bigger items, whether they’re fighter jets, air defense systems or submarines, the domestic market is unlikely to be able to sustain them in terms of economies of scale. You have to produce more to make it affordable, ”explained SIPRI’s Wezeman.

South Korea has been on the path to becoming a major arms producer and supplier for 20 years, rising from the 31st arms exporting country in 2000 to sixth in 2020, according to the SIPRI arms transfer database. 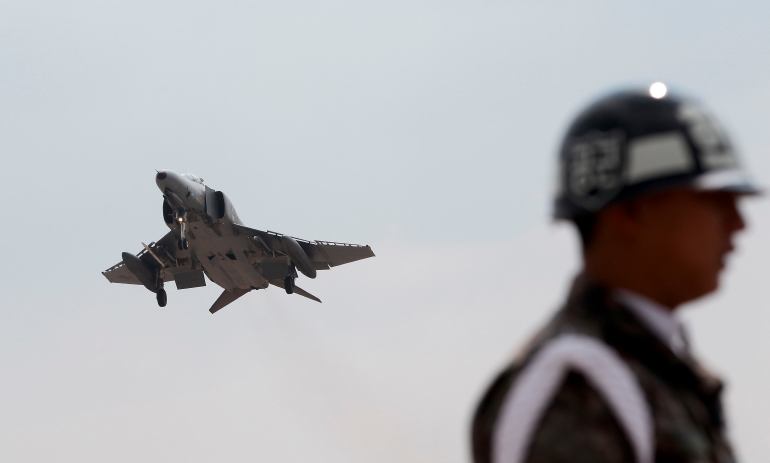 The new jet will eventually replace South Korea’s aging F-4 aircraft [File: Jeon Heun-kyun/EPA]Trade includes armored vehicles, tanks, and fighter jet trainers, which are sold to a variety of countries along with smaller ticket items such as cluster bombs and rocket launchers.

Moon has announced that South Korea plans to export the KF-21 to potential buyers including Iraq, Malaysia, Peru, the Philippines, Qatar, Senegal and Thailand.

Defense experts noted that the ship that docked in the western port of Lumut was the UMS Moattama, which was being completed at a South Korean shipyard when the Myanmar Navy picked up a group of more than 1,000 nationals deported from Malaysia earlier this year December 2019.

The arms trade has grown despite the fact that South Korea was one of more than 100 countries to sign and ratify the 2014 Arms Control Treaty, which “aims to reduce the human suffering caused by illegal and irresponsible arms transfers …”.

Some countries like Germany have already suspended arms exports to Saudi Arabia because of the conflict in Yemen, but there are no signs that South Korea will follow suit.

The Raybolt anti-tank missile launcher has played a prominent role in the fighting, even as Yemen has turned into the world’s worst humanitarian crisis, according to the United Nations.

South Korea announced in March that it would cease military exports to Myanmar, weapons that previously included military trucks and tear gas, according to South Korean news agency Yonhap. 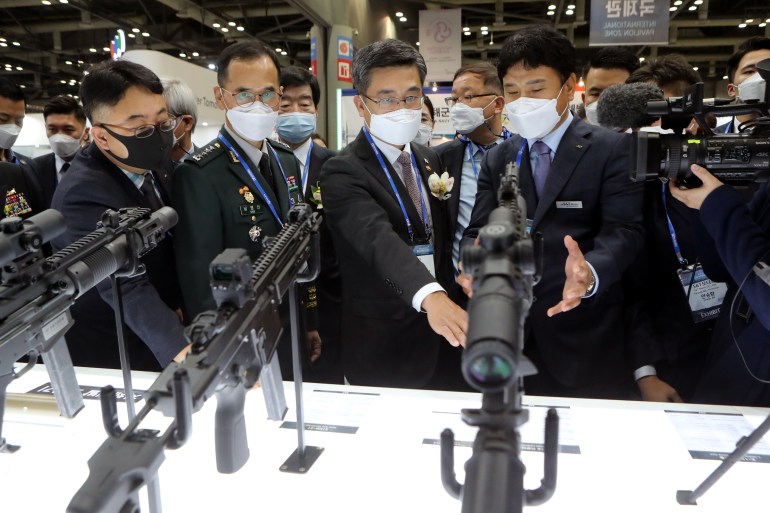 “It creates a higher level of supply … and it makes it more attractive and cheaper to buy weapons, which then creates more competition in the acquisition of weapons between states,” Wezeman said.

In East Asia, military spending increased for ten consecutive years from 2010 to 2019, according to SIPRI, and critics of the fighter question the contribution of South Korea’s massive arms build-up over the past two decades to national security and, in particular, to arms generation, which is conducive to peacebuilding the Korean Peninsula is beneficial.

The 1950-53 Korean War ended in a ceasefire, not a peace treaty, and North Korea is still considered the country’s primary security threat.

Some say this conventional arms disparity is one of the motives for Pyongyang to develop its weapons of mass destruction.

“As South Korea strengthens its conventional power, North Korea will have no choice but to stick to asymmetrical powers like nuclear weapons and missiles,” Hwang told Al Jazeera.

South Korea also faces what is known as the “security dilemma” in which a country’s spending on advanced weapons actually jeopardizes national security by causing competing countries to react and deploy increasingly advanced and expensive weapon systems that set the timeframe for review and verification shorten reflection as armed conflict develops. 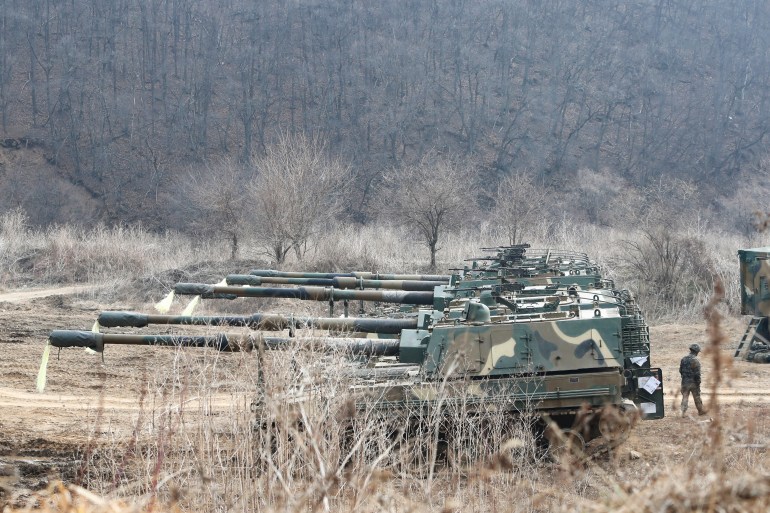 Some in South Korea fear that the country’s expansion in the defense industry could encourage the north to further develop its nuclear weapons to offset its relatively less sophisticated conventional firepower [FIle: Ahn Young-joon/AP]For peace activists in Seoul, however, the main concern is the impact of South Korea’s burgeoning military industrial complex on North Korea and the potential for Korean rapprochement.

“South Korea’s national security strategy should end the division and confrontation between the two Koreas, denuclearize the Korean peninsula and establish a peace regime through a peace agreement,” PeaceOne researcher-activist Oh Mi-jeong told Al Jazeera and condemned the stealth of the aircraft.

“That doesn’t work with weapons that are designed for pre-emptive strikes against North Korea and a regional arms race. South Korea already has enough fighter jets. “

U.S. Virus Cases Have Recently Dropped in Over Half of States

Payments vs. Titans is uncommon NFL sport on Tuesday evening

London to take away two statues over hyperlinks to slave commerce | Black Lives...

Mike Tyson and Roy Jones Jr ‘WON’T be examined for marijuana use’ earlier than...