The Caribbean island is covered in ash from La Soufriere volcano, which is ruining crops and contaminating water supplies.

Officials on the Caribbean island of St. Vincent have warned residents are suffering from water shortages as ash from La Soufriere volcano has contaminated local supplies.

The volcano erupted again around 6:00 a.m. local time (10:00 a.m. GMT) on Tuesday, the fifth day of the explosions, blowing clouds of smoke, ash and other volcanic material into the air over the flanks.

Between 16,000 and 20,000 people have been evacuated from areas near the volcano, including about 3,000 who are in more than 80 government-run shelters.

Local residents fill water tanks after a series of eruptions from La Soufriere volcano covered the area with a thick layer of ash [Robertson S Henry/Reuters]The central water and sanitation authority has not been able to extract water from the water sources since the volcano erupted, said government spokesman Sehon Marshall, which has depleted the water reservoir by more than 50 percent.

Dozens of people lined up on Tuesday to get water or pick up money that had been sent overseas by friends and family.

“No water, a lot of dust in our house. We thank God we’re alive, but we need more help right now, ”Paul Smart, a retired police officer standing in a crowd, told the Associated Press.

The island has been covered in ash from the volcano, which ruined crops and contaminated the water supply.

“We’re still looking for drinking water and food,” said Jenetta Young Mason, 43, who fled her home in the danger zone to stay with relatives, told Reuters.

During a press conference on local NBC Radio, Prime Minister Ralph Gonsalves said St. Vincent would need hundreds of millions of dollars to recover from the outbreak but did not provide any further details.

He added that no casualties have been reported so far. “We have to try to keep these records,” he said. 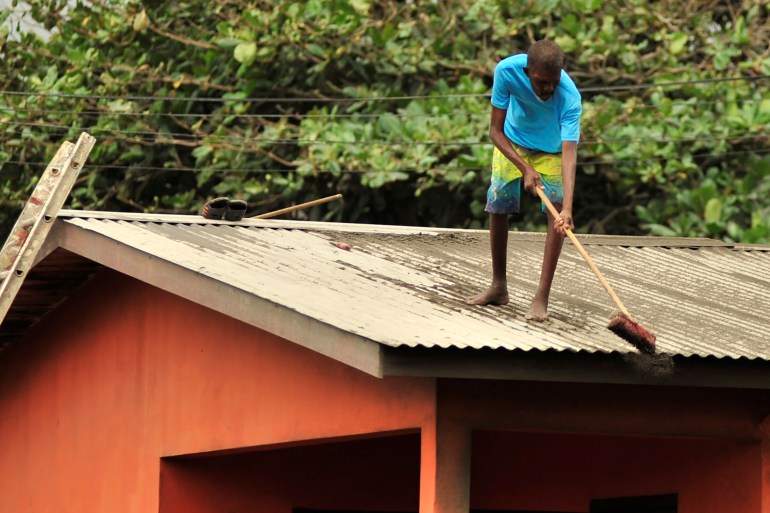 A local resident clears ash from a roof after a series of eruptions at La Soufriere volcano [Robertson S Henry/Reuters]Gonsalves has continued to urge residents who have refused to leave their homes near the volcano to evacuate as soon as possible.

On Monday, the spokesman for the Secretary-General of the United Nations, Antonio Guterres, said the entire population on the main island was without electricity or clean drinking water.

Stephane Dujarric said that around 20,000 people are in need, according to reports from the UN Office for the Coordination of Humanitarian Affairs (OCHA).

“The outbreak affected most of the livelihoods in the north of the island, including banana cultivation. Ash and lava flows are hindering the movement of people and goods,” Dujarric said during a briefing.

Covid: US backs waiver on vaccine patents to boost supply

‘The Angriest Octopus’ Lashes at a Tourist on an Australian Beach

US COVID deaths could have been ‘decreased substantially’ | Coronavirus pandemic News