Expert testimony delivered in El Salvador this week has revealed significant new details about what many consider to be the most brutal massacre of the country’s 12-year civil war decades ago.

Victims, experts and lawyers said the five days of hearings in the El Mozote Trial had revealed new information about the level of knowledge the United States had of the 1981 massacre of nearly 1,000 civilians by US-trained Salvadoran forces, as well as the Salvadoran chain of command .

“The fact that there are experts who make professional statements that repeat and corroborate the truth that the victims have kept over the years is a form of redress, clarification of the truth and sending an echo through the international Community, “said Eduardo Guerrero, a lawyer for the victims’ legal team through the Costa Rica-based Center for International Justice and Law (CEJIL), Al Jazeera said in a telephone interview.

The hearings came at a time when the administration of US President Joe Biden is pressuring the Central American governments to practice good governance, fight corruption and reduce impunity.

They are also fueling renewed calls for accountability and apology from the United States, which in the 1980s sent billions of dollars to the Salvadoran government to fight communism in the region, often turning a blind eye to violations of the law.

A man reads the names on a memorial to mark the 38th anniversary of the El Mozote massacre in the village of El Mozote on December 7, 2019 [File: Jose Cabezas/Reuters]The U.S. government has not yet apologized for its role in human rights abuses in El Salvador, including the El Mozote massacre, despite apologizing for other Cold War-era atrocities in the region such as the genocide in Guatemala and Argentina Dirty War.

“It would be a great relief to us as survivors who have lost so many family members. [to receive an apology from the US government]”Said Rosario Sanchez, a survivor of the El Mozote massacre, who attended court hearings in San Francisco Gotera, Morazan, this week.

“The US also has a responsibility because it shouldn’t have given money for such atrocities,” she told Al Jazeera over the phone.

The El Mozote case reopened in 2016 after the country’s Supreme Court overturned a 1993 amnesty law that prevented prosecution of human rights violations during the war.

An estimated 75,000 Salvadorans were killed between 1980 and 1992 in fighting between a left-wing armed uprising and the US-backed Salvadoran Army. A UN truth commission attributed about 85 percent of the violence during the conflict to the Salvadoran state.

Seventeen Salvadoran military officers are currently charged with murders, including torture, rape and enforced disappearance. Victims’ attorneys say a judge can decide that the case, which is still in the discovery phase, will move to the second formal phase of the trial until the end of 2021.

During this week’s hearings, American academic and Central America expert Terry Karl testified that the Salvadoran Army was pursuing an “extermination strategy” in El Mozote and described a subsequent cover-up by Salvadoran and US officials.

“If this had been made public, aid from the US would have been cut because it was illegal,” Karl said during her testimony, based on investigations in El Salvador in 1981, extensive interviews with key actors in the Salvadoran civilian population and war a review of the archival materials.

She also said the U.S. knew the Salvadoran Army used napalm, a highly flammable mixture that was banned against civilians by the United Nations in 1981.

David Morales, an attorney for the San Salvador-based human rights group Cristosal, who is part of the victims ‘legal team, told reporters in court that Charles’ report overwhelmingly showed that this type of military operation “could only be carried out with planning.” Orders, surveillance and cover-up by the Salvadoran High Command ”.

Clever Pino, a former Peruvian colonel and expert on counterinsurgency tactics, also testified on April 29-30 that a new military document showed that Operation Rescate, the army’s official name for what happened in December 1981, was ordered by senior officials.

This detail was particularly illuminating as the army refused to comply with a court order that would allow the judge in the case to review military archives – a major challenge for the case. 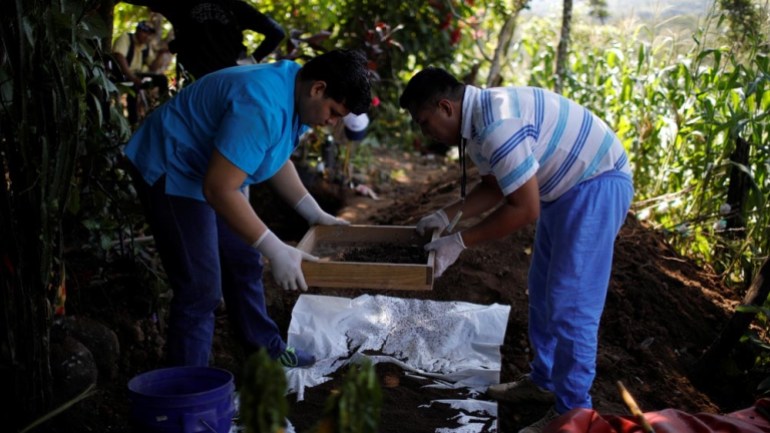 A forensic team is working at an exhumation site in the village of Yancolo in search of human remains from the El Mozote massacre [File: Jose Cabezas/Reuters]”The systematic rejection of Operation Rescate by the Salvadoran Armed Forces is a strategy of disinformation,” Pino said during his testimony, adding that the tactic “is used when the facts are too obvious or compromising and all that is left is denial “.

The Salvadoran government has not officially made any public statements regarding this week’s statements. Neither the President’s Office nor the Department of Defense responded to Al Jazeera’s request for comment in time for publication.

In the past, the Salvadoran Armed Forces said that the fighting in El Mozote was between the army and rebel fighters, rather than between unarmed civilians.

Immediately after the El Mozote murders, the US embassy in El Salvador also denied a massacre and denied that US-trained troops were involved in any way. However, the release of declassified State Department documents in 2018 showed a shift in the U.S. embassy’s stance.

Jean Manes, US Ambassador to El Salvador from 2015 to 2019, wrote about the El Mozote case on State Department cables: “The embassy continues to support the creation of strong democratic institutions in El Salvador, including the judiciary, to strengthen accountability and the judiciary should contribute transparency to all types of crime, both current and historical. “

This week, a US Embassy political attaché told reporters during the trial that the US “supports the rule of law and an independent process here in El Salvador,” without directly mentioning US involvement in the events in El Mozote. “We believe efforts to ensure accountability for human rights violations are important to ensure justice for victims,” ​​the official said.

For his part, Biden has stated that fighting impunity and corruption is a priority for his government as it is developing a $ 4 billion aid package to Central America to address root causes of migration amid increasing arrivals on the US southern border. 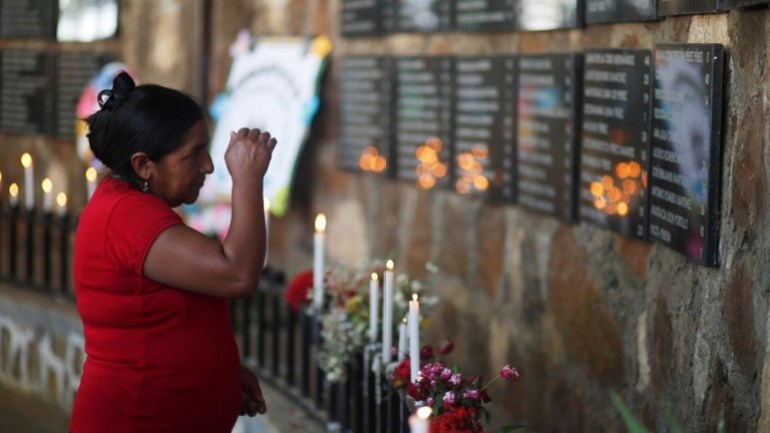 A woman prays during a memorial to the El Mozote massacre in the village of El Mozote on December 7, 2019 [File: Jose Cabezas/Reuters]”The jury is not yet sure if everything that has been said so far is really rhetorical or if the US government has an interest in correcting such terrible episodes,” said Oscar Chacon, executive director of Alianza Americas, an organization for immigration rights with a focus on Central America, Al Jazeera said.

For the victims of the El Mozote massacre, the trial provides an opportunity to demand accountability – and to have their voices heard. In addition to an apology, Sanchez said she believes the US should help make amends for the victims.

The Inter-American Court of Human Rights ordered reparations in 2012, and the Salvadoran government approved a list of reparations at that time. However, the victims’ lawyers say the state has only kept about 15 percent of those promises.

Through pain and controversy, the ‘Iron Cowboy’ chases 100 triathlons in 100 days

Amber Rose Needs Her Ex Kanye West To Maintain Her Identify Out Of His...